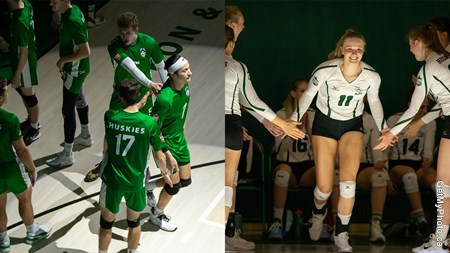 The Huskies get set to take on the visiting Brandon Bobcats.

The University of Saskatchewan Huskies women’s and men’s volleyball teams are back in action this weekend, as they get set to take-on the visiting Brandon Bobcats on home court.

The return home on the women’s side provides their first taste of game action since Nov. 27, as well as their first pair of home games since the Nov. 12 & Nov. 13 weekend.

Saskatchewan currently sits in first-place in the east division with a 5-1 record, as they enter the battle against the Bobcats on a five-game winning streak. It was Brandon who dished the Huskies their lone loss of the 2021-22 season back on Nov. 5 and it’s the Bobcats who are on the tails of their weekend counterparts as they currently hold a 4-2 record — good for second-place in the east division.

For Saskatchewan, the story starts with Mandi Fraser, who has been tremendous. Fraser leads the conference with a .521 hitting-percentage and in a tie for fourth for total blocks with 22.

Not to be forgotten is Emily Koshinsky, who is starring alongside Fraser. And surprise, surprise, Koshinsky sits sixth in the conference in kills this season with 84 and in a three-way tie for fifth in service aces with 11.

Koshinsky and Fraser will look to lead the Huskies this weekend, as they enter the pair of matchups as winners of five of their last six games against the Bobcats, with their last loss on home court coming back on Nov. 25, 2016.

Brandon will be hoping some home cooking for three of their own can help rewrite that narrative, as the weekend provides Taryn Hannah and Keely Anderson, products of Outlook and North Battleford, with their first taste of U SPORTS action in Saskatoon. Meanwhile, it’s a return to the Bridge City for fourth-year setter Alexa Shoults — a graduate of Evan Hardy Collegiate in Saskatoon.

But all eyes for Mark Dodds and company will need to be on Ravyn Wiebe. The fifth-year outside hitter, who was named a Canada West Player of the Week earlier this season, ranks second in the conference with 3.76 kills-per-set and is set to lead the Bobcats into town once again this weekend.

Meanwhile, on the men’s side, Saskatchewan is presented with a golden opportunity to rocket up the conference standings. The Huskies ended the 2021 calendar year with a pair of wins against this very Brandon side.

With only six games remaining in the regular-season, Saskatchewan sits 3-5, trailing the Brandon and the Manitoba Bisons narrowly, who each hold 4-4 records. If the Huskies were able to leap in front of one of those east division foes, they would be able to guarantee themselves a spot in the Canada West postseason for the third-consecutive season — which will be Sean McKay‘s focus as the weekend and season moves along.

If they are able to do so, it’ll likely be on the back of Dylan Mortensen, who is second in the Canada West with 122 kills this season. Alongside Mortensen, Skyler Varga has been  a standout of Saskatchewan, with the first-year outside hitter from Muenster, Sask. making an immediate transition to the U SPORTS scene with 87 kills this season.

This weekend provides the fifth and sixth meetings of the season between the Huskies and Bobcats with the season-series tied two games apiece. But this will be the first matchups at the PAC, providing the guys in green-and-white with a sense of familiarity entering an all-important weekend.

The key for the Huskies begins with slowing down João Cunha, a Rio de Janeiro product. The six-foot-eight Brazilian has been a force in the Canada West this season, sitting fifth in the conference in kills with 106 — 23 of which came in the two meetings between Saskatchewan and Brandon in December.

With a current marked increase of COVID-19 cases in Saskatchewan and the rapid spread of the Omicron variant, and the guidance of the Chief Medical Officer of Health, the games this weekend will be played without spectators in attendance, but fans can watch all of the action on CanadaWest.TV.

This article is shared as part of our Fair Dealing Policy. For the original article, please visit: https://huskies.usask.ca/news/2022/1/13/womens-volleyball-huskies-volleyball-begins-new-year-on-home-court.aspx