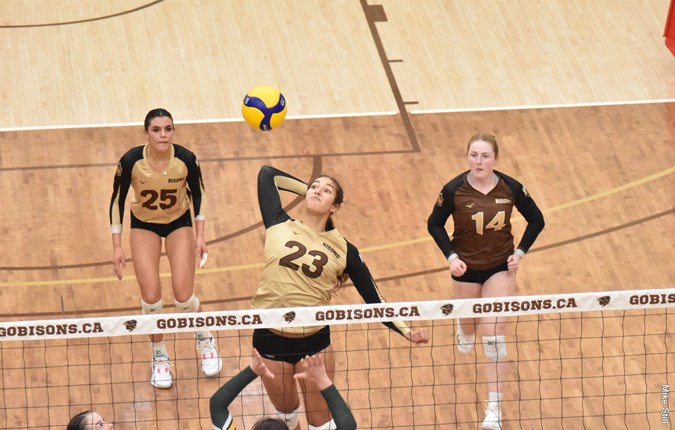 The 6’1″ middle recorded a career-high 14 kills and added five assisted blocks as the Bisons improved to 5-0 at home this season, rallying from one set down to top the Cougars.

Veteran Light Uchechuwku added a season-best 15 kills from the right and Raya Surinx had nine, plus 13 digs and three aces. Regina was led by six kills, three service aces and eight digs from Jordy McEachern. The win improves the Herd’s record to 5-4, while Regina falls to 0-9.

“[Catojo] didn’t play at all last weekend, because she literally was flat on her back from the week [with sickness]. Chloe [Ellerbrock] came in and did a great job against Brandon, and now Chloe is flat on her back sick at home, and Eve made it back just in time. That was key for us. I’m pleasantly surprised, considering she’s been absent for a bit here, and we needed her,” said Bisons head coach Ken Bentley.

“She’s what I expected her to be this year. She continues to grow and get better, and she’s such a physical presence. She does not take a back seat to anyone in this conference with her physicality at the net. She continues to improve her game and is a great kid to work with.”

The story of the first set was service pressure. The two teams combined for seven aces, five coming from the Cougars in a 26-24 win. It was the first set Manitoba has lost on home court this season.

The visitors abilities on serve-recieve forced Manitoba to play out of system numerous times early on, while attacking from the three-metre line.

With the Cougars up 16-8, Bisons head coach Ken Bentley called his second timeout. The break in play helped his side to re-group, as Ella Gray, Brenna Bedosky, Eve Catojo and Light Uchechukwu (two service aces) kept Regina on their toes from the service line.

Led by service pressure, five team blocks and impressive power from the three-metre line, the Bisons battled back, eventually taking a 22-20 lead.

Brenna Bedosky recorded a solo block and assisted block during the run, while fellow middle Eve Catojo led the attack with four kills and a .500 hitting percentage, along with three solo blocks. Rookie Chelsea Siebenga added a career-high three kills coming from the left.

“We were happy to get Chelsea in there. She’s improved like crazy,” said Bentley. “I kept her in there in some pretty big moments in the first set, and she delivered. She found a way to keep hitting, she communicated and talked which was big. She did a really good job and made the most of the opportunity for sure.”

Regina stayed in the fight however. A few costly Bisons violations at the net resulted in a swing in momentum, and the Cougars eventually took the set after a an ace from Jordy McEachern, her third of the set. Nya Chiek led the attack with four kills and an .800 hitting percentage.

The second set was all Manitoba. They opened up an eight-point lead early and didn’t look back, winning by 14.

Two service aces by leading attacker Raya Surinx, and a third by Ella Gray helped mould a strong showing, and the hosts hit .345, compared to .033 for Regina.

Catojo closed the set out with a kill, tying a career best with her seventh of the evening. Chiek added two kills for the Cougars, but it wasn’t enough to match the power of Uchechukwu, who had four, a few on deep power shots to the end line.

Both teams dug the ball hard to start the third set. It was a back-and-forth showing early, with Manitoba holding a slim 6-5 lead in the early stages. McKenzie Keibel had five digs on her side, while Surinx was a stable force in the back row, with seven.

The hosts dominated the rest of the way, turning it up a notch on the attack from all areas, while continuing to show excellent effort on defence. They hit .308, compared to .026 for Regina, and had eight team blocks compared to two for the Cougars as they out-scored their opposition 19-7 the rest of the way.

Catojo recorded a new personal best (at the time) with her eighth kill, and added two more, including the set-ender as the Bisons took a 2-1 lead. Uchechuwku was also lethal with six kills and a .458 hitting percentage heading into the fourth.

Regina took a 14-13 lead in the fourth set, however the Herd went on another run, scoring seven points in a row. Once again it was Catojo who helped shift momentum, tallying two empathic kills, while Surinx notched her fourth service ace.

Regina made a few run-killers, but couldn’t negate Catojo in the middle, who, along with Uchechukwu and Surinx, continued to fire from the front row as Manitoba took the game in four.

Both teams will be back in action tomorrow night at IGAC.

This article is shared as part of our Fair Dealing Policy. For the original article, please visit: https://gobisons.ca/news/2022/11/25/womens-volleyball-wvb-career-night-for-eve-catojo-helps-bisons-beat-regina-3-1.aspx