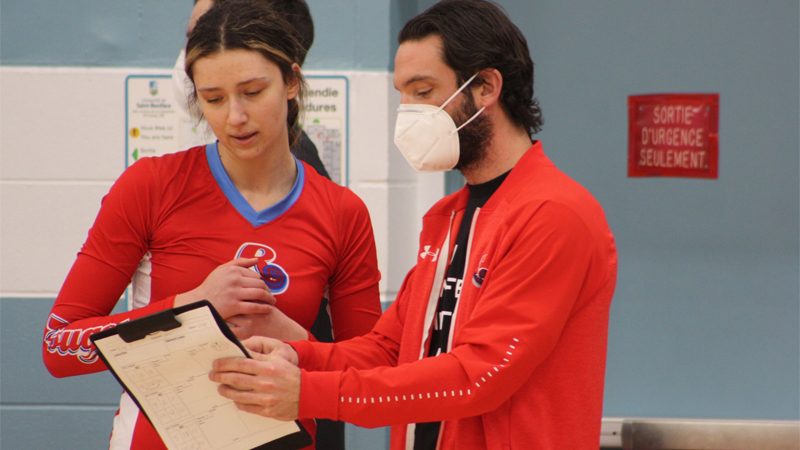 In CCAA Women’s Volleyball, two apprentices will participate in the Pacific Western Athletic Association (PACWEST), while another returns in the Manitoba Colleges Athletic Conference (MCAC).

The FACP, which is funded in part by Sport Canada, is designed to identify and support female graduating student-athletes who demonstrate the desire and skills for coaching by providing them opportunities to share in the coaching experience in the CCAA.

At Camosun College in the PACWEST, Morgan Monkman will be mentored once again by Brent Hall with the Chargers.

Hall is invested in preparing strong female leaders for success in Women’s Volleyball and he finds the idea of coach development and mentorship engaging.

“Morgan and I worked very well together in our first year with the FACP, but it is amazing how quickly the season goes by,” he said. “We were both left wanting to continue working together so that she can continue to benefit from my mentorship as her role becomes more defined and so that I can assist her growth with a deeper understanding of her interests and needs.”

Monkman, a two-time CCAA National Scholar Award recipient and silver medalist at the 2017 CCAA Women’s Volleyball National Championship, is grateful for the opportunity to work with an experienced and knowledgeable mentor once again.

“Last year, I benefited greatly from the development opportunities that were presented through it,” she said. “It is my goal to build on this coaching experience through the FACP’s second year.”

Monkman empathizes with student-athletes and recognizes that trust and integrity are foundational in promoting positive relationships within a team.

“Making all members of the team feel valued is a difficult, but essential, aspect of developing positive team culture,” said Monkman. “Every member of the team must be willing to work hard and place the wellbeing of the group first in order to achieve team success.”

Meanwhile, at College of the Rockies in the PACWEST, Rhiannon Paterson will be mentored once again by Bryan Fraser with the Avalanche.

Fraser’s passion for the sport and dedication to his student-athletes are nothing short of admirable, according to Paterson.

“In my time working with Bryan, I can attribute much of my increased knowledge of the game to him, including game strategies, techniques, drills, and overall team comradery,” she said. “It is humbling being able to stand alongside him to help push these athletes to be the best versions of themselves athletically, academically, and as active members of community.”

The level of experience Paterson has already received with the FACP has exceeded her every expectation. The duo has worked well together, and Fraser’s dedication and creativity continues to inspire her to be better.

“In terms of strategy, I feel much more confident with my learnings through this program and working closely with Bryan to create open dialog with feedback to the coaching staff on observations both with individual players and in an overall team setting,” said Paterson.

For Fraser, the opportunity to continue sharing, discussing, reflecting, and instilling his collected knowledge and ideas with Paterson is very exciting.

“Having a dedicated apprentice like Rhiannon has forced me to better articulate my current ideals and philosophies so not only Rhiannon could understand it, but so together we could provide our athletes with clear and direct messaging,” he said.

Finally, at l’Université de Saint-Boniface in the MCAC, Zoé Savoie will be mentored once again by Evan Turenne with Les Rouges.

Turenne is excited to have another opportunity to work with his former student-athlete after a successful experience with Savoie in 2021-22.

“(Zoé) became more confident running drills in practices and started planning parts of the practices as the season progressed,” he said. “Her in-game vision is strong, and she makes many recommendations to strategies and adjustments for the team and individuals during the game.”

Savoie, who completed her Development Coach certification last season, has learned quickly and is eager to study the coaching side of the game.

“The past season that I spent in Year 1 of the FACP was nothing short of one of the most meaningful experiences of my life,” she said. “The opportunity to still be involved with the sport of volleyball and Les Rouges organization means so much to me.”

For Savoie, the transition from student-athlete to coach was not an easy one. There were times last season where she longed to be out on the court.

“I’m so thankful that the FACP exists and that it has helped so many other women that find themselves in a similar situation, still be involved in the sport that they love after their time at university has ended,” said Savoie.

Throughout her athletic career, most coaches, trainers and mentors she’s had have been male. Savoie would like to change that narrative.

“It was not until I joined the FACP that I realized that most of my ‘superiors’ in sport were men,” she said. “This program has helped me reflect on a lot, especially on the role that I have as a woman in sport.” This article is shared as part of our Fair Dealing Policy. For the original article, please visit: https://www.ccaa.ca/sports/wvball/2022-23/releases/facp_west