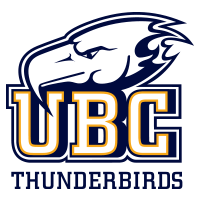 The Thunderbirds improved to 7-4 on the season with what stands as their first regular season win over the Spartans since Jan. 25, 2019. TWU, who is now 8-1, had previously won six straight regular season contests with the ‘Birds.

With a strong serving game, which saw UBC own a 9-2 advantage in aces, UBC was largely in control of the match from start to finish. Forced to play out of system much of the night, TWU had just a .154 attacking percentage compared to UBC’s .438.

UBC was led offensively by Matt Neaves, who had 14 kills while hitting .684.

QUOTABLE
Adam Schriemer – Interim Co-Head Coach
“We got beat by a team who was a lot better than us tonight. The good thing is hopefully we can put together a plan to be better than them tomorrow.

“We broke on our serve receive. We either got aced or overpassed. We didn’t have the chance to create plays. I also don’t know if we approached that match with the appropriate attention to detail that it needed.

“We see serves like that quite often. When it’s from a different player, it’s going to be slightly different but there’s nothing about that speed that we haven’t seen before. We just weren’t good enough today.

“We have to find a way to manage their serves and we also need to show a lot more toughness and togetherness to compete against a team like that.”

UP NEXT
TWU and UBC play the back half of their home-and-home series Saturday at the Langley Events Centre at 7 p.m. (PT).

About Spartan Athletics
As official members of U SPORTS, the Spartans currently compete in 13 sports in the Canada West conference, including women’s and men’s soccer, volleyball, basketball, hockey, cross country and track & field, as well as women’s rugby sevens. TWU also competes as an independent team in men’s rugby, as well as women’s and men’s disc golf. Since TWU entered U SPORTS in 1999, the Spartans have won 13 U SPORTS team championships and 31 Canada West team championships.

This article is shared as part of our Fair Dealing Policy. For the original article, please visit: https://gospartans.ca/news/2022/11/26/mens-volleyball-no-2-spartans-fall-to-thunderbirds.aspx

NO. 1 SPARTANS BEAT NO. 3 UBC IN FIVE-SETTER
LIONS EARN STRAIGHT SETS WIN OVER RIVAL TORONTO ON THE ROAD
Loading…