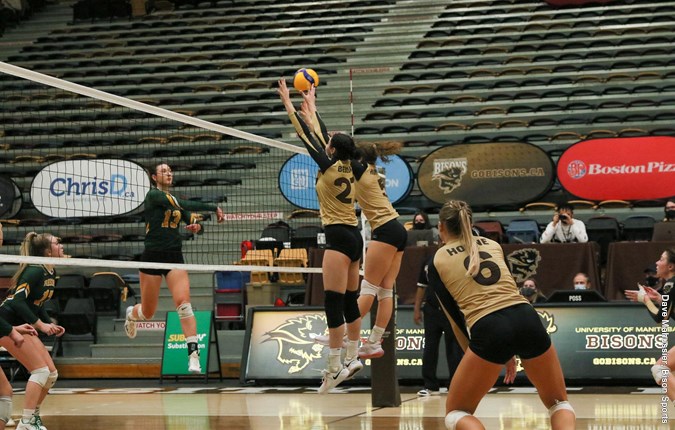 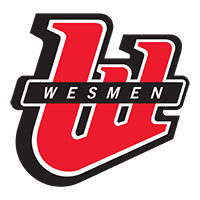 WINNIPEG — After losing in five sets on Friday, the Manitoba Bisons women’s volleyball team responded on Saturday, beating the Regina Cougars in four sets at the Investors Group Athletic Centre (24-26, 25-18, 25-23, 25-23).

The win improves Manitoba to 3-5 on the season while Regina falls to 2-4. Both teams now head into the holiday break, with the Bisons’ next regular season game not coming until January 21, 2022.

Leading the way for the Bisons’ attack was Keziah Hoeppner, who had 18 kills on 49 attempts.

The first-year also added ten digs, one part of a strong performance for Manitoba’s defence. The digs margin ended 94-81 in favour of the home team, as both setter Katreena Bentley and libero Julia Arnold were excellent in the back row, tallying 23 digs each.

The Cougars were led by 22 kills for Jessica Lerminiaux, one night after she had a Canada West season-high in that category in Regina’s victory.

The first set started well for the Bisons, but miscues encouraged Regina on to a 5-0 run of points — giving them an 18-17 lead.

A late substitution brought Light Uchechukwu in on the outside for the Bisons, and two kills off her arm late would tie it at 21. With both teams looking for an edge, it was a Katie House stuff block that secured a 26-24 set win for Regina.

In the second, Manitoba cleaned up their act. Taking a 9-5 lead into a Regina timeout, the Bisons gained further momentum after an extended rally — punctuated by a one-armed dig from Arnold — was finished by Simone Crevier. That lead was maintained throughout for the Bisons, as they went on to win 25-18.

The last two sets were closer, but both featured the Bisons taking an early set lead and holding on late.

In the third, a great service game from Bentley pushed Manitoba to a 13-8 lead. In the fourth, breathing room was provided by a handful of Cougars miscues. A service error and two attack errors in the opening moments gave Manitoba a 12-6 lead. The visitors used both their timeouts before the technical but were unable to grasp momentum. The Bisons would win both the third and fourth sets 25-23.

Regina will host the Wesmen to start their second half schedule, with matches on January 14 and 15. Manitoba returns to the court for the Duckworth Challenge against that very same Winnipeg squad on January 21.

This article is shared as part of our Fair Dealing Policy. For the original article, please visit: https://gobisons.ca/news/2021/12/4/womens-volleyball-hoeppner-leads-bisons-womens-volleyball-to-four-set-win-over-cougars.aspx