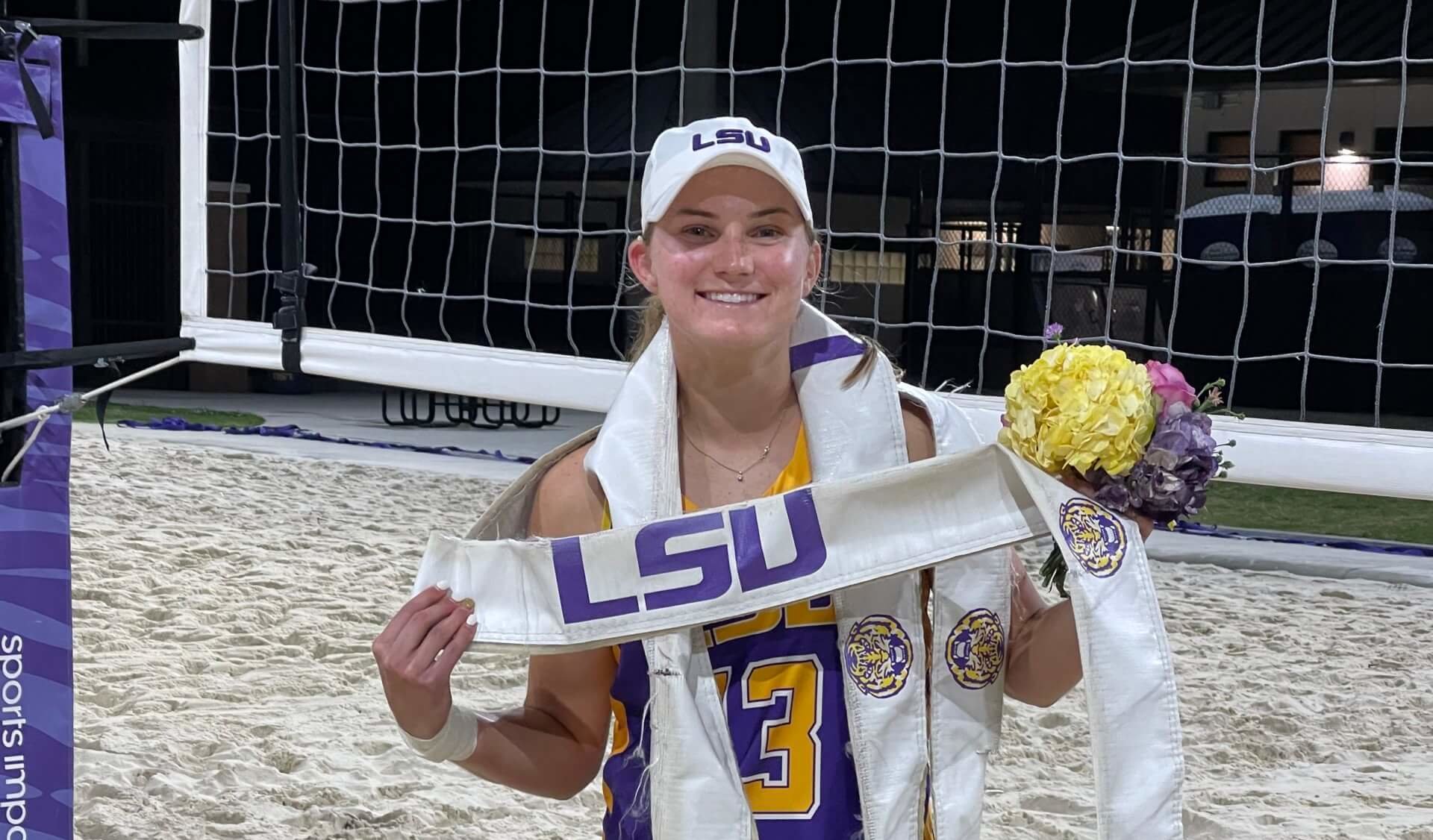 From My Perspective: Kristen Nuss

From My Perspective: Kristen Nuss

Since I first got into this great game, breaking the stigma and rewriting the script of a beach volleyball player has been my goal.

I got my first taste of beach volleyball in a 6-Man tournament as a sophomore in high school. Most women my age find beach volleyball much earlier in life, so it feels like I was late to the scene. The day after the 6-Man, there was a doubles tournament. My friend asked if I wanted to play. Why not? We played; we got destroyed. But I was hooked. That same friend, Megan Davenport, and I immersed ourselves more into the game the following year.

How does someone from Louisiana immerse themselves into beach volleyball? Great question. I started my journey to become a professional beach volleyball player about seven years ago. At the time, I wasn’t sure if that was even a possibility. I would watch the AVP and beach volleyball at the Olympics and see these fantastic players like Misty May-Treanor, Kerri Walsh-Jennings, and April Ross.

I began researching everyone. And there was one particular thing I’d look at first… height. Misty looks shorter than most of her partners and opponents, so she must be close to my size, right? Wrong… she’s 5’9″, a very important three inches taller than me.

The second thing I would notice was where they were from. It was a lesson in California geography; almost everyone was from some part of California.

So, when I said I wanted to be a beach volleyball player, there weren’t many things going in my favor. I was a 5’6″ player coming from a state that had virtually never heard of beach volleyball.

Those details didn’t stop Megan and I from playing as much as possible. We had found a sport we loved and couldn’t get enough. Businessmen, athletes, dancers – you name it, and I bet everyone has experienced that beginner’s feeling. Soon, it’s all you can think about.

We had a problem, though: no one else in Louisiana shared the same feeling. We struggled to find other juniors to play against. We begged our indoor friends to play in the weekend tournaments just so there would be enough teams. When that got old, we branched out and decided to start traveling for competitions. We had no idea what we were getting ourselves into.

Our first big tournament was in good ole Gulf Shores, AL, the same location as the NCAA Beach Championships. There were over 60 teams in our division. We had never seen more than about eight teams. Something else to keep in mind: no juniors playing beach volleyball in Louisiana meant we didn’t have a coach. We relied on our athleticism and indoor fundamentals. Boy, do indoor instincts not help much.

Didn’t matter much; we thought we were awesome. Looking back, I have no idea how we ended up playing this sport in college. Megan’s dad would film our games, making a “highlight reel” for Megan to send to colleges. He kindly put clips of me in it, as well, since I had no idea how that whole process worked. I recently watched this video and laughed for hours. I’m torn between wanting to share the clips for reference and wanting to bury them so no one can see us back then.

We somehow finished 2nd in that tournament, continuing our passion. It was chaos on the court, but we were beating people and finding success.

Without a coach, “practices” were interesting. It usually consisted of Megan and I running through the infamous pit drill a couple of times and hitting some shots. We’d often set each other 50/50 balls to see who could have the best hit. I’d inevitably destroy the tape and then get frustrated with my lack of height.

Obviously, it’s not the ideal height for a beach volleyball player. My whole life, I said I just wanted to reach 5’7″. My current coach Drew Hamilton likes to say: “You should have picked better parents.” If you have seen my parents, you know that 5’7″ was never in the cards for me. Thankfully, they did provide me with some athleticism to make up for it.

I’ve wanted to inspire others since high school. When I was coming up in the sport, no one looked like me. I wanted to change that. I wanted to provide the shorter kids with someone they could look up to.

The desire to inspire is what motivates me the most to keep striving for success. People aren’t coming up on the street and outright telling me, “You will never accomplish your goals.” But now, being partners with 6’4″ Taryn Kloth, everyone comes up to her. They ask how tall she is, and insist she must play a sport. No one is saying that to me. I just want those people to know: “Sir, ma’am, boy, or girl – you do not have to be tall to play a sport.” I’ve given up on someone random saying, “Wow, you must play a sport.” It will never happen. But it doesn’t matter – it fuels my fire to be the best I can be.

My other obstacle – my location – continued to be a problem, as well.

Megan and I made our way to California for a tournament when we were juniors. There were even more teams than in Gulf Shores, and the play was significantly better. It feels like everyone just in California just grows up playing; we were more than a couple of years late.

We did not have as much success there as in Gulf Shores. But we learned a ton. It showed us what we needed to get better at and different ways to play the game. One thing our trip assured us: we could not get enough of the sport and wanted to play in college.

LSU Beach Volleyball was just starting a program. They weren’t yet an established program, so they were just looking for local talent to fill the roster. Thank goodness for the perfect timing. I think I would have been looked over by top colleges if I were in the recruiting process right now. I am so incredibly thankful to Russell Brock and Drew Hamilton for allowing me to compete for, in my opinion, the greatest university out there – LSU.

I was able to play for my home state. On Day 1, my teammates and I were set on putting LSU Beach Volleyball on the map. For me, I think it meant a little more since I was the only in-state person in my class. But for all of us, it allowed us to play for something bigger. As I wrapped my career up this summer, I’d say we accomplished our goal. We may not have won a National Championship, but LSU will get one eventually.

Playing this sport while staying in Louisiana is probably my second strongest motivation – showing people that you can play this sport in a place other than California.

Everyone is constantly asking us, “So when are you all going to move to California?” The answer is: we are not moving to California. Why would we? Our coach (who is also our trainer and strength coach) is here in Louisiana. We have a gym free of charge. Rent is not severely overpriced. You get to train in some of the hottest weather, preparing us for all types of brutal weather conditions.

Honestly, I think more people should move to Louisiana! There are only two significant downfalls.

Regardless of those two problems, we’re not moving. If this past year showed us anything – it’s that we don’t need to live in California to be successful in this sport.

And I want all those 5’6″ers and below out there to believe that they can do this. I want to shatter the beach volleyball stigma, and I think Taryn and I can do just that!

This article is shared as part of our Fair Dealing Policy. For the original article, please visit: https://avp.com/news/from-my-perspective-kristen-nuss/

Canadian middle Arthur Szwarc has surgery. Out at least 5 months
Where AVP Athletes Come From
Loading…