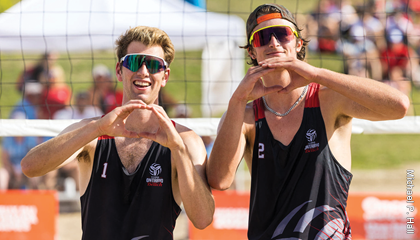 Toronto, Ont. (via U SPORTS) – Steven Abrams of the Windsor Lancers and Jonathan Pickett of the Guelph Gryphons are set to represent Canada at the 2022 World University Beach Volleyball Championships held in Maceio, Brazil from September 6th to 10th.

Abrams, a product from Georgetown, Ont. was a First-Team OUA All-Star during the 2022 indoor volleyball season and was named an OUA First-Team Rookie with the Lancers. Abrams participated in the U21 Indoor World Championships in Bulgaria, finishing 10th..

Pickett, of Wiarton, Ont., is a 2022 First-Team OUA All-Star and second-team All-Star. The six-foot-six power hitter was also named OUA West Rookie of the Year in 2020. He also played alongside Abrams in the U21 World Championships.

The duo is coming off a Canada Games beach volleyball gold medal victory and took first in the Calgary Open Championships. The two will look to stay in the win column against international competition in Brazil.

On the women’s side, Molly McBain of Florida State University (NCAA) and Lea Monkhouse of UCLA (NCAA) will don the Maple Leaf.

McBain, a product of Toronto, has accumulated a 101-29 record over five seasons with FSU and was named a 2021 Second Team All-American.

Monkhouse, of Mississauga, ON was named 2022 Pac-12 Scholar-Athlete of the Year and named to the NCAA All-Tournament Team. Monkhouse was a Second Team All-American in 2021.

This article is shared as part of our Fair Dealing Policy. For the original article, please visit: http://oua.ca/news/2022/8/30/volleyball-abrams-pickett-teaming-up-again-at-world-university-beach-championship.aspx

U SPORTS is the governing body of university sport in Canada. Their goal is to give its athletes the place they deserve both at the top of the podium and at the top of every Canadian's sports-watching agenda. This contributor is part of our Fair Dealing Policy: https://momentumvolleyball.ca/fair-dealing-policy/