Payden Vair (previously Olsen), a member of the Canadian women’s sitting volleyball team, is sitting right where she wants to be during this pandemic: next to her new husband, Carson Vair.

“We’ve always done our big trials in life together,” says Payden. “To us the pandemic is just another trial. We decided we would rather get married and go through it together, than apart.”

Engaged in March, the couple had originally planned to hold their wedding on Payden’s parents’ farm in Cardston, AB, on July 25, 2020, the two-year anniversary of Payden’s lawnmower accident, resulting in the loss of her right leg below the knee and reconstruction of her left heel. However, as the pandemic became more serious the couple decided to push their wedding forward to June 6.

“We had always planned on having a low-key country wedding,” says Payden. “The biggest stress of planning a wedding during COVID-19 was the limitation on the number of people that were allowed to attend.”

With Alberta’s gathering limit set to 15 people, the couple planned to have parents and grandparents only. However, by a stroke of luck, a few weeks before the wedding, the province changed its limit to allow 50 people to attend outside gatherings. This allowed the couple’s immediate and some extended family, for a total of 30 people, to attend their ceremony in Payden’s parents’ backyard. 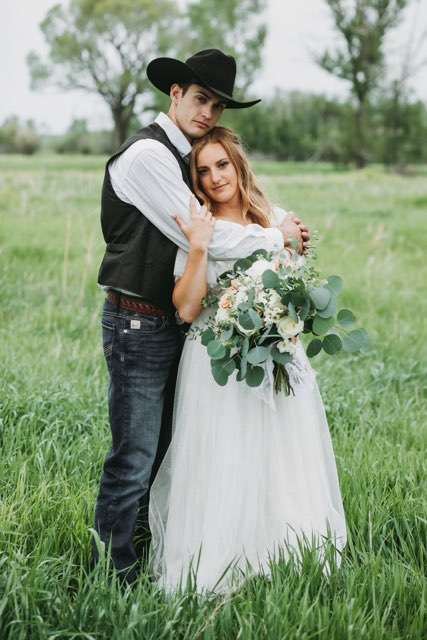 The pandemic hindered the couple’s original plan of hosting a wedding reception with all friends and family. Regardless, they found a creative way to still be able to celebrate with those they care most about.

“We made a drive-by wedding reception,” says Payden. “We sat on the back of an old Chevy truck in a roundabout as our friends and family drove by to celebrate with us.”

The reception had a great turn out, everyone kept a safe distance, and approximately 120 people showed up to celebrate the Vairs’ monumental day.

Payden and Carson met the summer of 2016. He supported her through her recovery process after her accident in 2018 and as she made the switch from being a competitive soccer player to taking up sitting volleyball.

“I’m still really weak from having my left heel reconstructed and still new to having a prosthetic,” says Payden. “Carson pushes me and doesn’t let me quit. He always finds a way to alter a workout to make it easier on me.”

Although disappointed the 2020 Paralympic Games in Tokyo have been postponed, Payden is viewing the pandemic as an opportunity to train more and improve her sitting volleyball skills.

Together the newlyweds have been doing at-home workouts and found new and innovative ways to stay active and in shape. “Recently Carson built me an outdoor volleyball court, six feet by six feet,” says Payden. “He tosses me the ball and I’m able to practice my movements and passing with him.”

Carson continues to support and motivate Payden as she strives to be the best player that she can be for the Canadian women’s sitting volleyball team. The 21-year-old made her international debut for Canada last summer at the Lima 2019 Parapan Am Games, winning a bronze medal.

“Once the pandemic is over, I’m excited for volleyball to pick up again and to be with my teammates; to compete in different countries and again represent Canada,” says Payden.

The Canadian Paralympic Committee is a non-profit, private organization who acts as the governing body for Paralympic sport in Canada. Its mission is to lead the development of a sustainable Paralympic sport system in Canada to enable athletes to reach the podium at the Paralympic Games. This contributor is part of our Fair Dealing Policy: https://momentumvolleyball.ca/fair-dealing-policy/