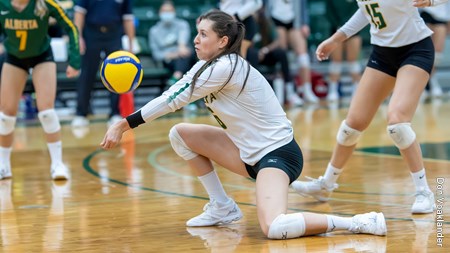 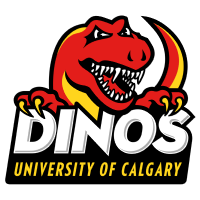 at University of Calgary

EDMONTON – The Alberta Pandas maintained their Canada West dominance in a straight set victory against the MacEwan Griffins on Saturday night at the Saville Centre.

The win moves the #1 nationally ranked Pandas to 8-0 on the season, and 17-2 all-time against the Griffins.

MacEwan drops to 0-8 in Canada West play going into the winter break.

Fourth-year hitter Jenna Zonneveld was the Pandas leader in kills with 16, while she was flanked with an impressive game from setter Edan Wade with 33 assists.

Pandas middle Vanessa Jarmin also made some history in this game, with 4 total blocks she is now the all-time program leader in blocks, with 286.

The Pandas started off scorching in the first set, with 11 kills good for a .529 attack percentage. Julia Zonneveld and Erin Corbett paced the Pandas attack with three kills each, while Wade played masterful distributer, assisting on seven Panda kills. The set ended 25-12 for Alberta.

The Griffins found their game in the second set, with Sarah McGee and Erica Bolink providing the firepower to win a tightly contested 25-23 MacEwan frame. Zonneveld paced the Pandas, with two straight aces among several kills and digs.

The Pandas must’ve found some spare bamboo lying around before the third set, as they quickly wrestled control of the game back from the Griffins. Led by four kills from Zonneveld and five – yes, FIVE – straight aces/unforced errors off serve from the hand of senior standout Kory White to end the set, a 25-17 finish.

The forth set ended up being the final one, as Alberta’s attack and MacEwan’s errors led to a 25-16 final setline. The Griffins attack percentage in the set was .000, being one of the main factors in the Alberta win.

This was the last game for both squads as they head into exam & winter break. The Pandas will return in near a month and a half, on January 21st vs the Calgary Dinos, while the Griffins travel to Calgary to face the Mount Royal Cougars on the same day.

This article is shared as part of our Fair Dealing Policy. For the original article, please visit: https://bearsandpandas.ca/news/2021/12/4/pandas-volleyball-8-0-pandas-cruise-into-winter-break-with-3-1-win-over-griffins.aspx